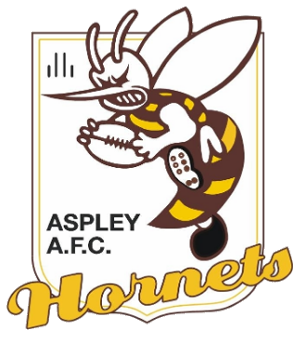 The roots of Aspley Hornets Football Club can be traced back to 1964, when it was founded as a junior club, before transitioning to incorporate seniors-level football four years later. The club's senior men's team competed in Division 1 of the QFA competition for several years and won six consecutive premierships between 1985 and 1990. The QFA is the leading metropolitan football competition in Brisbane and the south-east, sitting one rung below the Queensland Australian Football League. The club dropped to Division 2 of the QFA by the mid 2000's, its best result was reaching a preliminary final in 2006. Despite a poor 2008 campaign, Aspley were promoted to Division 1 for the 2009 season following the demise of fellow northern Brisbane team the Zillmere Eagles, on the basis of their strong financial position and impressive playing numbers. In recognition of this change, Aspley played four matches in the 2009 season at Zillmere's former homeground O’Callaghan Park.

In 2011 Aspley's senior men's team was granted a license to compete in the North East Australian Football League (NEAFL), the premier competition for independent clubs and reserves teams of AFL clubs based in Queensland and New South Wales. Aspley were a very competitive team in the NEAFL, qualifying for finals most seasons and claiming the 2014 premiership against the Sydney Swans reserves at their home ground, the Hornets' signature achievement. In 2020 the NEAFL was dissolved and Aspley accepted an invitation from the AFL Commission to participate in the Victorian Football League (VFL) from 2021, along with one other independent Queensland-based NEAFL team (Southport); it won its first game, but lost its next nine to win the wooden spoon, and declined to renew its licence beyond the 2021 season. In its sole VFL season, the club celebrated the individual success of Matthew Hammelmann who won the Jim 'Frosty' Miller Medal after kicking 42 goals to lead the competition goalkicking.